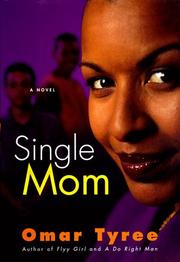 Tyree (Flyy Girl, 1996; A Do Right Man, 1997) returns with a well-intentioned if schematic tale of black men finding love and redemption as they begin to share the parenting burdens borne for too long by single moms. The tale is told by four alternating narrators over a period that begins in July 1997 and ends about a year later. There’s single mom Denise; then Jimmie, father of her eldest son, teenager little Jay; Walter Perry, father of her other son, Walter; and, finally, Brock, the man who loves her. After introducing themselves, the narrators chronicle their reactions to the events that have linked them. Denise recalls her teenage romance with Jimmie, her affair with Walter, and her successful struggle to go to college and own a business. Jimmie recalls his failed basketball career and his association with a gang that landed him in jail. Walter Perry, the only son of rich but unloving parents, remembers how he avoided Denise and his son after the affair, concentrating instead on his career. And Brock, a divorced truck driver with style and a loving heart, wants a —good woman— in his life. As the story begins, all four are ready for a change: Jimmie wants to get to know his son; Denise is tired of trying to manage alone; Walter wants to be a better father than his own has been; and Brock, soon after meeting Denise, feels smitten. As the months pass, the fathers learn some of the rewards of fatherhood; Denise, still suspicious of their intentions, begins to appreciate the positive way in which her sons are responding to their presence; and Brock, liked by all, finally persuades Denise to marry him. There are no major events, just an accretion of hours spent in the company of family and friends. An earnest plea for commitment with all the subtlety of a sermon from the bully pulpit.