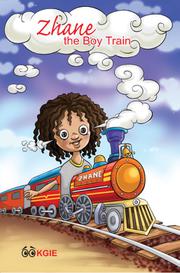 by Ookgie ; illustrated by Yami

A boy is struck by lightning, makes a wish, and is magically transformed in this lengthy picture-book debut.

Zhane Sparks and his friends win a basketball tournament against their rivals, a team of bullies. Zhane credits his big brother and his lucky toy train for helping them to victory. Showing their team spirit and good sportsmanship, the boys and their coach congratulate the other team for a game well played. As Zhane and his pals head to Zhane’s house to celebrate, he’s struck by lightning. Despite the rainstorm, he spots a shooting star and wishes not to die; in the next moment, he’s magically transformed into a train with a boy’s head and arms. Zhane’s friends and family—as well as a scientist, who is only briefly introduced—get inside the train, where they meet a robot assigned to assist Zhane on a quest. As it turns out, Zhane must collect at least 25 objects from various locations that the scientist will use to make a formula to turn him back into a boy. Although there are numerous illustrations in this book, the dense text makes it more appropriate for readers who are just starting to pick up chapter books. The huge cast makes it difficult to keep the various characters straight, especially as Zhane’s friends have very few details to identify them and match them to the illustrations. Yami’s cartoonlike color artwork features a diverse array of people in a Baltimore setting. Some images, however, don’t match the tone of the text; one, in which Zhane is struck by lightning, shows him simultaneously smiling up at the sky. Readers may also be frustrated that the rivalry between the two basketball teams is quickly abandoned, and the stilted prose (“The news reporter made it to the center of the circle....He puts the microphone to Coach Bennett’s mouth”) is likely to confuse beginning readers.

A children’s book that may have trouble finding an audience due to its strange premise, huge cast, and clunky writing.