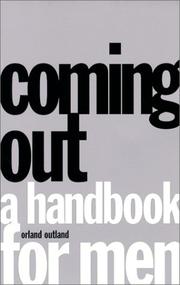 A Handbook for Men

A frank and witty manual for the young man hoping to come to terms with his sexual orientation. More a guide for finding your way in the gay lifestyle than for psyching yourself up to come out, this one covers the bases: dealing with potentially devastated parents, hitting the bar scene, understanding which sex acts are safe and which are not. This thorough updating of Coming Out Right is intended mainly for teenagers and early 20-somethings, though questions late-bloomers might pose are answered, too. As such, Outland (The Principles: The Gay Man’s Guide to Getting (and Keeping) Mr. Right, not reviewed) lists some stereotypes to be exploded (“Gay people recruit unsuspecting young people into their ranks”) and offers advice for coming out to parents (if you are “still dependent on your parents for support . . . gauge just how volatile their reaction might be”). Beyond the fundamentals, the author leaps into full-blown queer life. His counsel regarding the prevalent drug culture poses some controversial observances (marijuana would be legal “in a rational society”), and his caveats having to do with being an escort (read, sex-for-hire) quickly segue into practical advice for becoming one. All this is peppered with colorful language and non-euphemistic sex talk, including a vast glossary of terms from “AC/DC” to “water sports.”

Potentially divisive for aiming so forthrightly at its audience, this is nonetheless empowering, educational, and necessary.