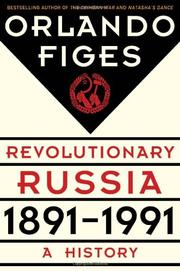 The dean of contemporary Russian studies—and a gifted popularizer—ventures a refreshing thesis that joins the fondest dreams of the Bolsheviks to the full-circle collapse of the Soviet Empire.

Figes (History/Birkbeck Coll., Univ. of London; Just Send Me Word: A True Story of Love and Survival in the Gulag, 2012, etc.) delivers the welcome insight that “red Russia” really began in a time of widespread famine in 1891, when Russians of various classes and regions realized that the czarist regime was of no help—so helpless, in fact, that it called on the people themselves for solutions, which “opened the door to a powerful new wave of public activity and debate which the government could not control and which quickly turned from the philanthropic to the political.” With the bloodletting of the Russo-Japanese War, thanks to an inept general command, the die was cast, proving Trotsky’s observation that a human crisis needed a match of human agency to bring about revolution. Figes carefully reminds readers that the revolution happened in stages: first in 1905, then again in 1917—twice, the first when the czar was overthrown, the second when the Bolsheviks wrestled power away from a coalition that would likely have proved more humane, and certainly more democratic, had it remained in government. The result was the grim regime of Stalin, which was not inevitable but instead hinged on the accident of Lenin’s weakness in illness and Trotsky’s talent for making enemies. Figes ably explains the subsequent Nazi-Soviet pact, which Stalin parsed as “Leninist,” and the slow thawing that came about after the dictator’s death in 1953. The author then joins the developments of the final four decades of Soviet power to the earlier era, writing that Mikhail Gorbachev’s reforms were proposed much earlier—decades, in some cases—than they were enacted.

As ever, highly readable and of tremendous interest to students not just of Russian history, but also of modern geopolitics—and not least due to the fact that Soviet heir Vladimir Putin remains in power.