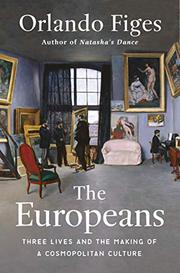 Three Lives and the Making of a Cosmopolitan Culture

A prodigiously researched account of the spread of culture throughout the mid and late 19th century using three specific biographies to personalize the voluminous historical data.

Figes (History/Birkbeck Coll., Univ. of London; Revolutionary Russia, 1891-1991, 2014, etc.) returns with another astonishing work displaying his vast knowledge of art, music, literature, culture, and history. Wisely, he uses three people to embody much of his discussion: Russian writer Ivan Turgenev, French singer Pauline Viardot, and her husband, Louis, a political activist and literary figure. The author follows these three over the decades—Turgenev and Pauline had an intimate relationship that Louis tolerated—and through their stories, we see specific instances of the cultural changes Figes illuminates throughout the book. The growth of railways, the advances in photography and publication, the explosion in literary translations, the vast increase in literacy—these and other factors increased the development of a kind of common European culture that only the growth of nationalism, and the consequent wars, could weaken. “The arts played a central role in this evolving concept of a European cultural identity,” writes Figes. “More than religion or political beliefs, they were seen as uniting people across the Continent.” This necessitated the “recognition that any national culture is a result of a constant dialogue across state boundaries and of the assimilation of separate artistic traditions into a larger European world.” Turgenev and the Viardots traveled continually: She was a popular singer, and, initially, it was her financial success that supported her family. Later, her voice gone, it was Turgenev’s writing and generosity. In many ways, the text is a who’s who of the time period. Liszt, Dickens, Balzac, Hugo, George Sand, Chopin, Tolstoy, Flaubert—these and countless other icons move smoothly through the narrative, a rich mélange of tasty ingredients. There are some mild surprises, too: Mary Shelley briefly wanders in (we read Victor Frankenstein’s description of the Rhine), and Henry James makes some cameos.

A powerful and essential addition to our understanding of European history and culture.