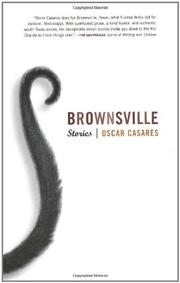 Texan Casares debuts with nine stories about economic hardship and emotional resourcefulness in a cross-cultural zone straddling the US-Mexico border.

The pieces here—set in Brownsville, way, way south in Lone Star country—are broken into three categories with individual titles in an attempt to make them work as groups, but it’s a needless artifice. The opener (“Mr. Z”) tells of a young boy’s first job experience at a fireworks stand—an opportunity to lose economic innocence by giving away as many roman candles as he sells; “R.G.” is about a man’s intimate relationship with his hammer—his tools are his life—as he lends it to a better-off neighbor who promptly forgets the loan and comes to believe the hammer is his. In the next subgroup of stories we find “Domingo,” who works in the yard of a well-off gringo lady and contemplates his hopeless state and dead daughter while yet managing to find grace and faith in labor. In the final group, “Jerry Fuentes” is the funeral salesman swindler who takes a young narrator and his wife for a ride; “Yolanda” is the beautiful neighbor in whose imagined arms a teenaged narrator finds hope of better times that aren’t in the offing; and “Mrs. Perez” is an aging woman who finds meaning in a depressed world through bowling, of all things, and pride in her cherry-red ball that stands for fading allure. But what will happen when she witnesses the ball stolen before her very eyes and the thief turns out to be a relative? Casares’s prose is crisp and efficient, but he relies too heavily on an expected sympathy for the disenfranchised, and one wishes that the Español we get here—meant to paint a truly Hispanic world—went beyond the first three weeks of Spanish 101.

Honor amid poverty from a still-growing voice.