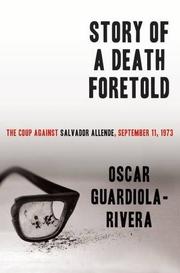 STORY OF A DEATH FORETOLD

A tangled yet tender study of the revolutionary forces, both leftist and rightist, that converged in Chile during the turbulent 1960s and wrought a political miracle and tragedy.

The election of socialist Salvador Allende to the presidency of Chile in 1970 proved a stunning vindication for the people’s democracy movement in Latin America, as well as a shock to the Cold War–weary United States, terrified that it had another Cuba in its backyard. Guardiola-Rivera (Birkbeck, Univ. of London; What If Latin America Ruled the World?, 2010, etc.) plunges passionately into the construction of what Allende and his followers and colleagues such as Pablo Neruda called la vía chilena, the Chilean Way, defined as a “peaceful transformation of the state” by legal, constitutional means, a deep commitment to building a coalition of all levels of society, including indigenous peoples, agrarian reform, nationalization of industry and banking for the equal distribution of wealth, and a repudiation of violence as business as usual. Building the “revolution from below” took decades and a careful grass-roots movement, as the author argues, that involved returning to enlightenment ideals of the 19th century that had been shunted aside by U.S. imperialist aims in the region since the turn of the century. At the same time, the far right gathered strength from the fascist model of the Spanish Civil War, and the large corporate interests sought help from the U.S. government, which helped strangle Allende’s economic measures in boycotts and sanctions. This allowed the military, handed to Gen. Augusto Pinochet by Allende himself, to wait and see which way the wind was blowing. The author gives a truly chilling account of Allende’s last hours under bombing at his palace.

Avowing there is much misinterpretation of these terrible events from both sides, Guardiola-Rivera invites a deeper, intellectual look inside.

PINOCHET AND ME
by Marc Cooper
Fiction

THE SON OF BLACK THURSDAY
by Alejandro Jodorowsky
Nonfiction