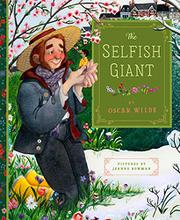 The richly sentimental 19th-century tale gets a 21st-century setting.

Poor artistic decisions stymie a worthy effort. Preserved here unaltered (though printed in teeny-tiny type), Wilde’s economically written original makes for, as ever, stately, sonorous reading, aloud or otherwise. Visually, Bowman’s eye-filling garden scenes sandwich genuinely shiver-inducing tangles of dry stalks swathed in frost and snow between, in better seasons, views of luxuriant masses of outsized flowers and greenery. The giant is a red-haired, white gent in moderately antique clothing…but the tiny children he chases away (and later welcomes back) are a racially diverse lot in school uniforms and sporting backpacks and hula hoops. Taped-up advertisements on the outside of the giant’s wall and other details further add to the understated contemporary air, and the smallest child, who comes back at the end bearing stigmata to welcome the now-elderly giant to his garden, has an unruly shock of dark hair and an olive complexion. All of this updating comes to naught, though, because with supreme disregard for the story’s essentially solemn tone and cadences, Bowman arbitrarily sticks in silly bits—first depicting Hail as a baboon with a bright red butt (the garden’s other winter residents are at least embodied as northern animals) and then in a climactic scene putting the giant into humongous footie pajamas decorated with bunnies and carrots. Talk about discordant notes.

Opinions may differ about the story’s sublimity; here it’s been made ridiculous.