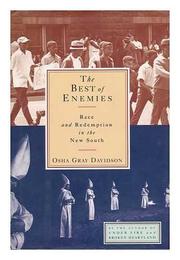 THE BEST OF ENEMIES

An intimate yet broad presentation of the slow gains made in racial reconciliation in today's South.

Davidson (Under Fire: The NRA and the Battle for Gun Control, 1993, etc.) offers a study of racial tensions in the contemporary South as reflected in the lives and thought of two school board members in Durham, N.C. Ann Atwater was a black civil rights advocate, while C.P. Ellis was, when they first encountered each other, a Ku Klux Klansman. Needless to say, they held deeply polarized positions on race, class, and, specifically, school desegregation. Durham is an appropriate backdrop to the unfolding drama of their confrontation, as it promised much and delivered little to the families of both Atwater and Ellis. The Dukes' tobacco money never filtered though to the poor Ellis family in this "Magic City,'' nor did the capital of "Negro Progress'' make life easier for the Atwaters. Ann's progression out of poverty was painfully slow. To C.P., civil rights legislation seemed part of a plot by blacks and Communists who were, in the words of the Ku Klux Klan, "bent on destroying the white race through economic oppression and intermarriage.'' Davidson skillfully reveals how the rhetoric of the Klan has had such a profound effect on poor whites. It took violent rioting in the wake of the King assassination and a violent confrontation between Ellis and Atwater at a school board meeting to shock C.P. out of his old ways. He realized that the people he had been taught to view as enemies had a just cause. More important, both Atwater and Ellis came to accept that they shared a common struggle against Durham's rich and powerful, a struggle in which they had a greater chance of victory if they worked together.

This eloquent blend of history and advocacy journalism ends with a follow-up on the major figures and with that rarest quality in a book on race in America--a reason for hope.

FIRE IN THE TURTLE HOUSE
by Osha Gray Davidson
Nonfiction