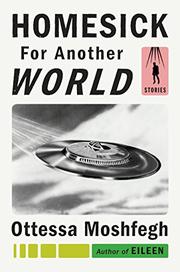 HOMESICK FOR ANOTHER WORLD

Moshfegh’s most remarkable talent early in her career is to turn distasteful domestic situations into magnetic storytelling: her superb debut novel, Eileen (2015), is a Highsmith-ian tale of alcoholism, abuse, and unrequited love, and though the 14 stories in this collection don’t let much more sunlight in, their concision and gallows humor do give them a lift. In “The Beach Boy,” a longtime married couple returns from a vacation, and when the wife suddenly dies, her undeveloped vacation photos force the husband to reassess his understanding of her (did she really hook up with a prostitute?) and himself. In “A Dark and Winding Road,” a well-off man runs into his reprobate brother’s meth-smoking girlfriend, a meeting that proves (in quintessentially Moshfegh-ian phrasing) “disgusting—just as I’d always hoped it to be.” Youngsters are no more or less foolish, like the aspiring actor in “Nothing Ever Happens Here” who falls for his aging landlord, the broke Brooklyn hipster in “Dancing in the Moonlight” who schemes to seduce a high-end furniture designer, or the narrator of “The Weirdos” who can’t quite extract herself from her boorish boyfriend. For all these foibles, though, Moshfegh never approaches her characters from a position of cruelty, with an intention to mock them; they are for the most part ordinary people undone by their desires, just in more peculiar and Day-Glo fashion than everyday life. Moshfegh's prose is usually plainly realist, but “Mr. Wu,” about a man who devises a complex scheme to seduce a woman running a Chinese internet cafe, is a piercing fable of unrequited love. “Life can be strange sometimes, and knowing it can be doesn’t seem to make it any less so,” one character says, and Moshfegh has proven herself more willing than her contemporaries to dive into the muck of that strangeness.

A smartly turned and admirably consistent collection about love and its many discontents.