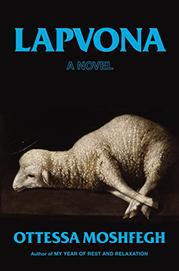 A peasant boy gets an introduction to civilization, such as it is.

Moshfegh’s gloomy fifth novel is set in the medieval village of Lapvona, ruled by Villiam, who’s paranoid and cruel when he’s not inept. (For instance, he sends murderous bandits into town if he hears of dissent among the farmers.) Marek, a 13-year-old boy, is becoming increasingly curious about his brutish provenance. He questions whether his mother indeed died in childbirth, as his father, Jude, insists. (The truth is more complicated, of course.) He struggles to reconcile the disease and death he witnesses with the stories of a forgiving God he was raised with. His sole source of comfort is Ina, the village wet nurse. During the course of the year tracked by the novel, Marek finds his way to Villiam, who fills his time with farcical and occasionally grotesque behavior. Villiam’s right-hand man, the village priest, is comically ignorant about Scripture, and Villiam compels Marek and a woman assistant into some scatological antics. The fact that another assistant is named Clod gives a sense of the intellectual atmosphere. Which is to say that the novel is constructed from familiar Moshfegh-ian stuff: dissolute characters, a willful rejection of social norms, the occasional gross-out. At her best, she’s worked that material into stark, brilliant character studies (Eileen, 2015) or contemporary satires (My Year of Rest and Relaxation, 2018). Here, though, the tone feels stiff and the story meanders. The Middle Ages provide a promising setting for her—she describes a social milieu that’s only clumsily established hierarchies, religion, and an economy, and she wants us to question whether we’ve evolved much beyond it. But the assortment of dim characters and perverse delusions does little more than repetitively expose the brutality of (as Villiam puts it) “this stupid life.”

A blackhearted but wayward yarn.