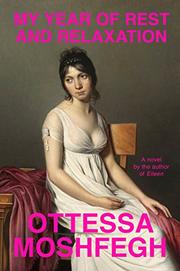 MY YEAR OF REST AND RELAXATION

A young New York woman figures there’s nothing wrong with existence that a fistful of prescriptions and months of napping wouldn’t fix.

Moshfegh’s prickly fourth book (Homesick for Another World, 2017, etc.) is narrated by an unnamed woman who’s decided to spend a year “hibernating.” She has a few conventional grief issues. (Her parents are both dead, and they’re much on her mind.) And if she’s not mentally ill, she’s certainly severely maladjusted socially. (She quits her job at an art gallery in obnoxious, scatological fashion.) But Moshfegh isn’t interested in grief or mental illness per se. Instead, she means to explore whether there are paths to living that don’t involve traditional (and wearying) habits of consumption, production, and relationships. To highlight that point, most of the people in the narrator's life are offbeat or provisional figures: Reva, her well-meaning but shallow former classmate; Trevor, a boyfriend who only pursues her when he’s on the rebound; and Dr. Tuttle, a wildly incompetent doctor who freely gives random pill samples and presses one drug, Infermiterol, that produces three-day blackouts. None of which is the stuff of comedy. But Moshfegh has a keen sense of everyday absurdities, a deadpan delivery, and such a well-honed sense of irony that the narrator’s predicament never feels tragic; this may be the finest existential novel not written by a French author. (Recovering from one blackout, the narrator thinks, “What had I done? Spent a spa day then gone out clubbing?...Had Reva convinced me to go ‘enjoy myself’ or something just as idiotic?”) Checking out of society the way the narrator does isn’t advisable, but there’s still a peculiar kind of uplift to the story in how it urges second-guessing the nature of our attachments while revealing how hard it is to break them.

A nervy modern-day rebellion tale that isn’t afraid to get dark or find humor in the darkness.