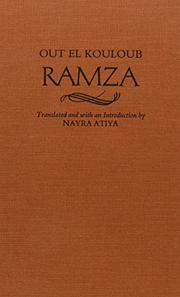 Out el Kouloub achieves a modest success by importing some of the feel of an 18th-century British novel into her rendering of harem life in traditional Egypt. Egypt's Out el Kouloub based Ramza, written and published in French in 1958, on her own harem experience, and she portrays these forbidden women's quarters in Middle Eastern households in all their paradox. Sequestered from the outside world, the harem women create their own exclusive world where oral culture thrives: They exchange stories to entertain, console, and bond with one another. Ramza, the novel's heroine, breaks both male and female norms by venturing into her father's study (in the men's part of the house) where she learns to read and write. Although time is unspecified, the novel is set in the era of British influence over Egypt (18821952), and Ramza's education is distinctly European. Influenced by John Stuart Mill's The Subjection of Women and Samuel Richardson's Clarissa, Ramza, not surprisingly, grows into a young woman of surging independence who is constantly threatened by the undertow of her powerful emotions. After the death of her bridegroom on the eve of an arranged marriage, Ramza falls in love with Maher. Forbidden by her father from marrying Maher because of his social status, Ramza resolves to escape the harem and elope. Her pursuit of desire and fulfillment at all costs gives her an appealing intensity, but Out el Kouloub (Khul-Khaal, not reviewed) often mars the characterization with melodrama. During Maher and Ramza's assignation in a Bedouin tent one can almost hear ``Midnight at the Oasis'' wafting through the flaps: ``Maher pulled me into his arms and his lips touched mine. At that moment I felt I was committing the greatest folly of my life, but I could not stop myself.'' Unique by virtue of its subject and resourceful treatment, not the author's craft.