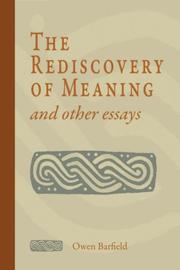 THE REDISCOVERY OF MEANING AND OTHER ESSAYS

Owen Barfield has unusual ideas about human nature and reality which he has set forth in several books, like Saving the Appearances, Worlds Apart, and Romanticism Comes of Age. Now this seasoned British thinker (b. 1898) offers a collection of 21 essays from three decades that reflect the entire range of his interests including the philosophy of science, physics, biology, psychology, metaphysics, aesthetics, literature, linguistics, and religion. Barfield's ideas are unusual in their insistent quest for the ""unity underlying apparent or actual fragmentation"" of appearances--unity of language and essential meaning, matter and spirit, mind and nature, dream and reality. He believes human consciousness lost its original knowledge of this unity when it was bewitched by science's confidence in rational experimental method, the truth of appearances, linguistic literalness, materialism, and the like. But he foresees a time in the ""evolution of consciousness"" when mind will pass beyond these limiting biases to comprehend the unified ""psychophysical cosmos"" and draws support for this belief from an impressive variety of sources, e.g., Romantic poetry, quantum physics, anti-Darwinist biology, Eastern religion, theosophy. In the concluding essays, Barfield states his own religious assumption: the quintessential symbols of cosmic unity are to be found in the Christian Gospels. Barfield is nothing if not audacious, and he is at his best when assailing the prejudices that he believes infect the leading intellectual disciplines. He is a prophet of the New Consciousness who has been around a long time; and he may well be the most comprehensive and critically incisive of them all.