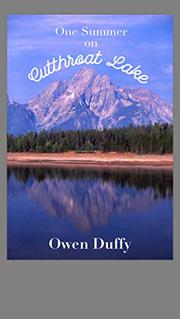 ONE SUMMER ON CUTTHROAT LAKE

A disparate group of people encounter unexpected peril in the mountains in this historical novel.

Duffy, the author of The Artichoke Queen (2015), opens his new story in 1946. Francine Lilley is a divorced woman who’s made a long, tedious train voyage from New York City to tiny Braxton, Wyoming, where she’s bought a run-down dude ranch, The Flying U, and intends to reinvent her life by making a go of the place. Also intent on remaking her life is Jessica Quick, who’s come to live with her sister after enduring a broken love affair and a miscarriage, both of which have driven her into a destructive pattern of heavy drinking. Jessica takes a job as cook and general helper at The Flying U, working for the boss of the place, Ed McCann, and hoping someday to be allowed to lead a group of hunters and tourists on a trek into the backcountry around Cutthroat Lake. The novel’s opening third depicts Francine and Jessica’s slow acclimation process and introduces various complications; for example, a group of high-spirited New York friends come to visit Francine and see the Wild West, and a young war veteran named Sonny Trace introduces himself to both Jessica and Francine, the latter of whom thinks that he looks like a gunslinger, “even if the only gunslinger she’d ever seen was in a Hollywood film.” When Ed leads an expedition to the lake that encounters an aggressive grizzly bear, things take a tragic turn.

Duffy’s storytelling is deceptively laconic; by the time Ed’s expedition sets out, readers will be fully invested in the major characters and their various, clashing worlds. The dramatic addition of an almost supernaturally malevolent bear to the proceedings just makes the overall story more compelling. The author makes a wise narrative choice to pull the reader out of the company’s immediate peril and instead focus on Jessica and Sonny as they track them and grow increasingly worried; the suspense is skillfully handled and refreshingly melded with the growing personal attraction between the two latter characters. Duffy adopts a pleasing, quasi-folkloric tone in some of his narration, which fits well with the wild setting; at one point, for example, he stoically writes about a past bear-attack victim: “It had been so cold the man had barely bled, and by the time his fellow hunters got to him, they found him sitting on a log singing a trail song, his bloody exposed teeth whistling in the breeze.” The author carefully manages the pacing in the book’s second half, although some readers may balk at the behavior of the monster grizzly, which sometimes seems more like the shark in Peter Benchley’s Jaws than anything that hikers are likely to encounter in real life. Nonetheless, the human characters are well drawn throughout, and the tension of the climax is so adroitly handled that readers won’t be able to put the book down. Fans of C.J. Box’s and Paul Doiron’s work will likely find this book appealing.