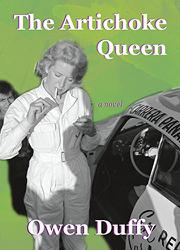 After the death of her mother, a young woman vows to live her life to the fullest and embarks on a career as a race car driver, defying the norms of 1950s America in Duffy’s debut novel.

Prudence Baylor is a force to be reckoned with. A childhood accident took most of her ability to hear, but it also sparked her deep desire to prove herself. After fleeing an unhappy home life, the 20-year-old takes up her aunt’s offer to come to Los Angeles for a Hollywood audition. But when she’s robbed during a stopover in San Francisco, Prudence is too proud to ask for help and resolves to make it on her own in a new city. Her determination and never-say-die attitude help her land a waitressing gig at a top jazz club. Later, when an opportunity to join the race car circuit presents itself, Prudence eagerly takes it and quickly falls in love with the profession. Within the cocoon of her car, she thinks, there’s no “need to hear well, here she had no shortcomings.” She soon becomes a star, both on and off the track, using beauty pageants and celebrity appearances to help finance her racing career. But as she deals with dizzying developments in her personal life, can she, a woman who prides herself on beating the odds, admit that she may be in over her head? Overall, this is a fun read with a hard edge. Duffy dabbles in nostalgia but isn’t held hostage by it; his characters, including Prudence, may live in an idealized time, but they’re far from perfect. These flaws make them relatable as people and provide avenues for character development. In one race, for example, a multi-leg journey across Mexico, Prudence makes a decision that will haunt her, but it’s in her search for redemption that she ultimately finds a way forward. Duffy’s narrative lags a bit as he approaches the novel’s climax. However, the story finishes strong, providing surprising insights into the lives of those closest to Prudence.

A sentimental but never sappy coming-of-age tale that hits all the right notes in unexpected ways.