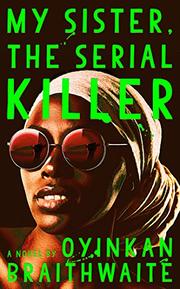 MY SISTER, THE SERIAL KILLER

From the hospital rooms and living spaces of Lagos, Nigeria, comes a dryly funny and wickedly crafty exercise in psychological suspense.

Introverted, sensitive Korede is a nurse, a very good one from what we see of her at work. She feels such a connection with her patients that she finds herself taking a coma victim named Muhtar into her confidence. There’s one secret in particular that pours out of Korede like scalding liquid: Her flamboyantly beautiful younger sister, Ayoola, has this habit of killing the men she dates. (Three, so far.) She hasn’t been caught yet because Korede cleans up after her. They both disposed of the most recent victim, a poet named Femi, so efficiently that nobody in his family or with the police know his whereabouts. So that, as Korede is concerned, is that; except there’s this single good-looking doctor named Tade at the hospital where she works who has his eye on Ayoola—even though Korede has tried her best to win Tade’s attention. Now she tries to warn Tade that her sister’s relationships “tend to end, badly." His response: “Oh…guys can be jerks.” (Yes, they certainly can.) As Tade and Ayoola begin their romance, Korede’s the one who has to answer questions about Femi’s disappearance, and, seemingly out of nowhere, Ayoola acquires yet another suitor named Gboyega, prompting both Korede and the reader to wonder which of these unwary gentlemen Ayoola will favor and what will happen to him. Generations of gothic mystery aficionados have attended these uneasy and insidious events before. But besides the setting, what makes Braithwaite’s first novel stand out from others in this genre is the unobtrusively sly approach she takes to the conventions of “black widow” storytelling and the appealing deadpan voice of the jittery yet world-weary Korede. Along the way, there are scattered glimpses of life in Lagos, most acidly when Korede deals with the routine corruption involved in a traffic stop.

Even your most extravagant speculations about what’s really going on with these wildly contrasting yet oddly simpatico siblings will be trumped in this skillful, sardonic debut.