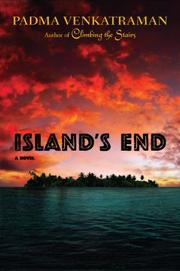 In an isolated island culture, a girl guides her people into the future despite encroaching mainland influences.

Uido lives on an Andaman Island in the Bay of Bengal. Her family is one of 40 in this island’s communal hunter/gatherer tribe; they live in a village of thatched huts during the dry season and move to the jungle for the rainy season. Because Uido visits the Otherworld in dreams, the tribe’s oko-jumu (spiritual leader) chooses her as the next oko-jumu. Lah-ame trains Uido in the jungle, teaching her how to start fires, make medicines from plants, perform rituals and chase away lau (illness spirits). What Lah-ame can’t teach Uido is how to handle the biggest threat: Strangers who keep landing on their island, bringing matches and digital cameras, provoking curiosity and discontent. An insect-eating plant hints that adaptation enables survival, but Uido’s choices become increasingly difficult, especially when the strongest spirit, Biliku-waye, warns her of “[m]onster waves” approaching. Uido’s clear, intelligent, present-tense voice consistently engrosses as she pushes through doubt and loss to find the right path. The beach, jungle and cliff settings are palpable. Perhaps most important, Venkatraman never undermines the portrayed religion. There is very little information about Andaman Islanders, making it hard to gauge the authenticity of this portrayal; the author’s note indicates a respectful and diligent approach to her subject.