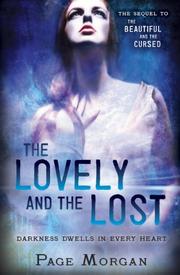 THE LOVELY AND THE LOST

From the Dispossessed Trilogy series, volume 2

The saga of a girl and the gargoyle she loves begun in The Beautiful and the Cursed (2013) continues.

Paris in 1900 turns out to be home to a whole catalog of demons that roam the streets and sewers. In the previous book, 17-year-old earl’s daughter Ingrid learned that she has both angelic and demonic blood and the ability to create lightning. Her twin brother is a part-time hellhound. Her 16-year old sister, Gabby, just wants to fight demons, although the Alliance, a society that exists to do just that, doesn’t want her. Luc, a gargoyle tasked with protecting Ingrid and her family, can’t seem to manage that task alone. Worse, Luc has fallen in love with Ingrid, which is forbidden to his kind. As various demons and societies come into conflict in their attempts to capture Ingrid, havoc ensues. Although Morgan weaves the strands of plot together more convincingly than in the first installment, she still demands a lot of readers. They will be amazed that society girls in long dresses and corsets can sword fight so well. In fact, the historical setting appears to exist solely for atmosphere. Most characters, especially Ingrid and Gabby, behave as fully modern 21st-century people, and the entire plot would have worked as well in a contemporary setting. Clichés abound: Everyone is beautiful; kisses burn; true love seems preordained.