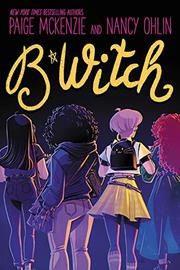 From the B*Witch series, volume 1

Teen witches are tasked with finding those who are threatened by their existence.

Sorrow Point, Washington, seems like a typical American small town except for the two secret covens of sophomore witches who have been feuding since junior high. When newcomer Iris—who is just doing her best to manage her anxiety and sensory processing disorder—arrives, Greta (the levelheaded leader), Binx (the technomancer rebel), and Ridley (the studious and artistic one) make plans to recruit her before the rival coven does. Since the new president started stirring up venomous hatred toward witches, there have been more Antima (Anti-Magic) members lurking around. Suddenly, the girls start receiving threatening shadow messages. Their entire existence is illegal and could spell trouble if anyone ever found out who they truly were. As they attempt to track the notes’ sender, tragedy strikes, and now the covens will have to band together to find out who murdered a fellow witch. The author crafts an honest, promising story narrated through a third-person omnipotent voice and featuring an inclusive, distinct cast of young women who detail their unique struggles. The story fizzles at the very end with the setup for another installment, however readers will relish the character-building as they get to know these young witches. Greta is cued as Latinx, Iris is white, Binx is Japanese American, and Ridley is black and trans.