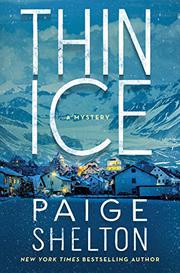 Beth Rivers, an author who writes thrillers under the name Elizabeth Fairchild, spent three days in a van with an obsessed fan/kidnapper before leaping out of the moving vehicle. After having been hospitalized for injuries that required brain surgery, she’s looking for a place to stay where no one will find her, and she settles on the remote town of Benedict, Alaska. The only ways to get to Benedict are by air or water, and the only one who knows Beth’s true identity is Police Chief Gril Samuels, who sends park ranger Donner Montgomery to pick her up at the airfield because Gril’s busy with an unexplained death. Beth’s plan to stay at Benedict House is almost derailed when she discovers that the hotel is actually a halfway house for female criminals, currently three shoplifters who do odd jobs around town. Beth’s father vanished when she was young, and her mother has spent years looking for him. Beth, raised mostly by her police-chief grandfather, worked for the department as a secretary, though her math and analytical skills sometimes pressed her into service as a crime-scene tech. Now she carries burner phones to keep in touch with her doctor and the detective back home who's working her case. Unable to remember everything that happened to her, she thinks her kidnapper’s name is Levi Brooks but can’t picture his face until she starts having flashbacks. Curious about the death of Benedict local Linda Rafferty, which could be murder or suicide, Beth takes up Gril’s offer to be his consultant and also run the local newspaper, giving her a chance to research Rafferty’s death as she searches for Levi Brooks. In the process, she discovers that she’s far from the only person in Benedict with something to hide.

A page-turner with an unusual location and a coda that provides more questions than answers.