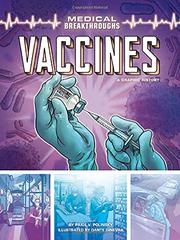 From the Medical Breakthroughs series

Historical background for readers hazy on the whys and wherefores of vaccines.

Polinsky traces the development of vaccines from 16th-century reports of inoculation against the “speckled monster” of smallpox in what is described as merely “Asia” to the release in 2020 of vaccines for Covid-19. The narrative is dense, injected with names, dates, and scientific terms. Unfortunately, it’s already somewhat dated and turns notably skimpy when it comes to describing how the Covid-19 vaccines were developed. More disturbingly, although the author comes down hard on the author of a since-discredited 1998 claim that certain vaccines cause autism, she notes without justification or comment that Lady Montagu and even Jonas Salk tried out vaccines on their own children and that researchers mass-cultured the polio virus in “tissue from human embryos.” Figures, White or light-skinned, stand in static poses uttering wooden declamations (“Daniel Oliver, my boy, you have just received the first vaccine in American history!”). Ginevra cuts a few corners, pairing the writer’s blithe assurances about how safe the treatments are to multiple views of children being stuck, scratched, or bandaged. In one disquieting scene, we see polio victims in iron lungs as bodiless heads. Readers concerned about viral diseases and their treatment (who isn’t these days?) will come away somewhat better informed—but hardly soothed. (This book was reviewed digitally.)

Clotted with facts, it barely scratches the surface when it comes to immunological details or ethical issues.