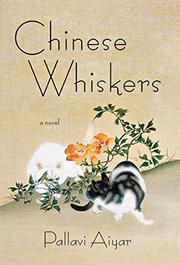 When Soyabean is still a kitten in the Xu household, he is adopted by Mr. and Mrs. A, waiguo Ren, or foreigners, who live in a large courtyard house in old Beijing. Soon after, Tofu arrives, a dustbin cat, rescued by the animal league and brought to the courtyard as company for Soyabean. The two cats have escaped a life of hardship in a country that regards pampered pets with suspicion, though with a rapidly growing middle class, that is beginning to change. Narrated in alternating chapters by Soyabean, a handsome, lazy ginger tom, and Tofu, a small dark cat who prefers the world from her perch in the courtyard’s pomegranate tree, the novel cat-walks between credibility and fantasy, just as these animal stories do. The cats understand human speech and other animals, and though their knowledge is limited, their intelligence isn’t; not unlike the way we view our pets anyway. Soyabean grows into a beautiful fat cat, so much so that he’s hired to star in a cat-food commercial. Soyabean’s already considerable ego (and girth) grows as he becomes a star for Maomi Deluxe. Tofu is suspicious, and rightly so; she overhears Xiao Xu confess that Maomi Deluxe is made from melamine, and cats are getting sick. One evening, Tofu is kidnapped by a band of rogues convinced cats are the cause of the SARS epidemic. She escapes the van and finds shelter with provincial laborers. Will Tofu find her way home? Will Soyabean be able to warn the nation about Maomi Deluxe? A gentle happiness abounds in this simple tale, set against the backdrop of a rapidly changing China.

Modern consumerism clashes with traditional Chinese culture, as observed by two cats in this small charmer.