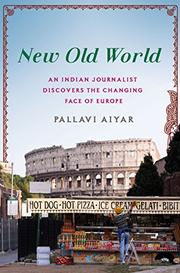 An Indian Journalist Discovers the Changing Face of Europe

A longing for harmony and an embrace of multiculturalism mark this foreign correspondent’s examination of the European situation as seen from Brussels.

Married to a diplomat who moves around constantly, Aiyar (Chinese Whiskers, 2011, etc.) has previously recounted her stint in China. Here, she presents intriguing observations from her time in the unofficial European Union capital from 2009 to 2012. A feeling of malaise permeated her stint in Brussels—a city often seen as dull but simmering with linguistic rivalry (French vs. Dutch) and immigrant angst—beginning when she was robbed at the airport. As an Indian-born woman who had just arrived from the driven entrepreneurial Chinese capital of Beijing, Aiyar was stunned by the rules and regulations in this neat and tidy European capital and especially by the natives' aversion to work—that is, the relentless work pursued by the upstart Chinese and Indians, entailing long hours and sacrifices the Belgians are often not willing to make. In chapters devoted to different facets of the EU crises of the last few years, Aiyar looks at how demographic shifts are affecting business in a city where nearly a quarter of the population hails from Muslim countries; the lucrative Antwerp diamond industry is no longer a Jewish monopoly but has been infiltrated by the Mehtas and the Shahs. The Belgian workers might enjoy “some of the world’s most elaborate entitlements,” writes the author, but in an age of increasing austerity, “Europe’s clout was weakening.” Europeans, in contrast to the Chinese and Indians, might be environmentally conscious, but Aiyar is offended by their “smugness.” The author delves into ways the Indians and Chinese have managed to take advantage of Europe’s “protracted economic trough” by opening businesses in new areas—e.g., the pickled gherkin market.

Fresh insight into how Europeans might learn valuable lessons from developing countries.