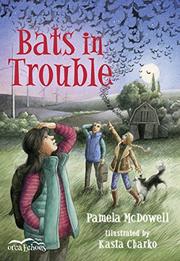 Visiting her grandfather’s Alberta farm, Cricket and her best friend, Shilo, discover dead bats near wind turbines operated by the local utility, work out the problem, and find a way to help the bats migrate more safely.

This is a third episode in a Canadian series about animal-lover Cricket McKay, who previously saved ospreys and salamanders (Salamander Rescue, 2016, etc.). The 11 short chapters include grayscale illustrations (often occupying a full page) showing the white characters in action. Emerging readers in the primary grades will appreciate the simple, straightforward writing and larger-than-usual type but may be confused by the opening story fragment featuring a character who doesn’t figure in the actual story. That ghost story, told around a campfire, is a way of introducing Shilo’s fears about bats. Happily, as she learns what bats actually do and don’t do, these fears disappear. The two girls identify the dead bats—migrating hoary bats—encounter another local species while sheltering from a hail storm in Mr. McKay’s old hay shed, and make origami bats themselves. (A missed illustration opportunity shows several stages of their paper-folding but not the complete instructions.) Finally, they come up with a clever and successful way of sharing their concerns with townspeople and the electric company. An epilogue tells readers more about bats and about the scientific study on which the story is based.

Purposeful but effective in delivering an environmental message and encouraging action.