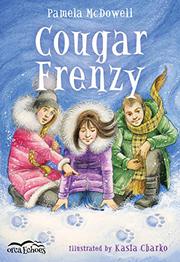 From the Orca Echoes series

Through the investigations of young Cricket and her friends, readers learn how to distinguish evidence of a cougar from other animals—and are briefed on cougar conservation and monitoring.

When Cricket and her friend Shilo notice a foul smell coming from piled-up snow and branches under a bush, Cricket suspects that a cougar has hidden its dinner. Her father, Warden McKay, proves her right when he shows up at her school, giving an emergency presentation about cougars. A cougar has been seen in their village, which is located inside Waterton Lakes National Park, Alberta. After Cricket’s dad informs kids about some cougar facts, Principal Singh gives students a rare week off from school. It’s odd, then, that the warden’s children proceed to wander the village. However, McDowell’s books about Cricket typically favor facts about wildlife above all else, and, also typically, this one does not disappoint. It even clarifies one statistic as specifically Canadian. Overall, the dialogue is more natural than in Salamander Rescue (2016), if equally packed with information. The nine chapters and epilogue are accessible, entertaining, and empowering for young naturalists. The compelling plot twist: Anxious villagers are accusing cougars of a series of large-mammal crimes. Cricket, knowing that cougar relocation can be fatal, wants to ensure continued, occasional village visits by a family of tracked cougars. She devises a scheme to trap the real culprit. Illustrations are pleasant enough, depicting a largely white cast, though at least three characters have Asian surnames.

Young environmentalists will appreciate seeing how facts can defy frenzy.