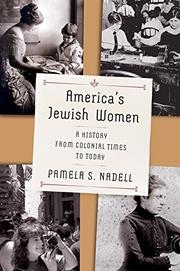 A History from Colonial Times to Today

The distinct diaspora story of Jewish women in America.

Nadell (Women’s and Gender History, Jewish Studies/American Univ.; Women Who Would Be Rabbis, 1998, etc.) presents a sweeping history of American Jewish women beginning in the mid-17th century. Focusing on specific individuals and even specific families, the author presents a personalized story that is slanted toward progressive Jewish women and the legacy of Reform Judaism. Nadell follows a natural and predictable progression through the history of American immigration. The first American Jews were few in number and, despite opposition from some quarters, managed to live alongside their non-Jewish neighbors in relative harmony. The Revolutionary and Civil wars punctuate their family stories, and though Jewish women largely lived out domestic roles, they did manage to win certain new freedoms and places of influence in their communities. In the late 1800s, Jewish women took part in many of the era’s social reform movements and laid the groundwork for important work that would be required with the coming wave of immigrants in the early 20th century. These new Jewish immigrants, mainly fleeing Russian pogroms, lived difficult lives in precarious economic times, but many managed to succeed even in the face of increased anti-Semitism. Throughout these years, Jewish women entered the ranks of political and social progressives. A final wave of immigrants, survivors of the Holocaust, added new complexity to the American Jewish community. In the postwar era Nadell explores the lives of such diverse Jewish women as Joyce Brothers, Betty Friedan, and Ruth Bader Ginsburg, among many more less-famous individuals, whose roles in popular culture, politics, and social trends have been significant. The author largely succeeds in providing a fascinating portrait of American Jewish women, though her subject matter is definitely slanted toward Reform and even secular Jews. She offers little examination of Orthodox or even Conservative Jewish women’s lives, especially in the modern era.

A worthwhile history given the difficulties of capturing such a wide-ranging population.