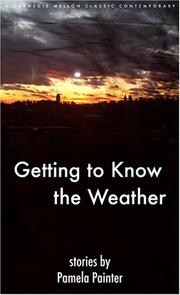 GETTING TO KNOW THE WEATHER

These 13 stories have been published in numerous literary magazines (Ploughshares, Ascent, Epoch, Literary Review, Sewanee Review, etc.), but in their insistent shallowness and often easy compromise with stereotype, a person wonders why. Readable but thin, stories like ""Intruders of Sleepless Nights"" (a burglar thinks a couple is asleep) and ""Patterns"" (a psychotic mailman kills people if they interrupt his life's minor rituals) are in the tradition at best of 30 minute Hitchcock--suspense, resolution, twist--where plot dominates and people are, in the end, type-cast only. Painter's hand-me-down stories of country folk can sometimes be touching (as she gets closer to giving birth, the nympho young woman in ""The Sorting Out"" stops caring who among the many candidates the father might be), but equally often they are as familiar (and worn) as old shoes, as when a boy is party to a gang of his father's poker buddies who beat up and then castrate a local playboy (""Winter Evenings: Spring Night""). Stories here that may be polished on the outside are frequently merely jejune at the core. The well-mastered professional detail about musicians' lives on the road in ""The Next Time I Meet Buddy Rich"" is reduced to window dressing by pseudo-dialogue at the heart of the story like ""But sometimes wanting isn't enough"" or ""Vince understood. Five years I've been breaking my ass to get the big break, trying to make it happen."" Most egregious of failures may be the ludicrous stereotyping of white liberals and ghetto blacks in ""Night Walk"" and ""Sylvia,"" where the stories creak and groan with unearned emotion and one simplistic categorizing after another--""Tucker, you is almost done work tonight,"" says one of your basic black men, and a white Winnetka commuter cites his qualifications for depth of feeling when he says, ""Christ, I know what the city's like, I'm there every day,"" and (just in case we're not so sure--as his wife weeps in the living room over the fate of her young black maid), adds later, ""Down there it's a different world."" Stories that are often ""well-written,"" but that are hollow, like calorically empty food.