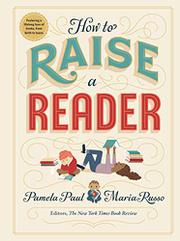 HOW TO RAISE A READER

New York Times Book Review editor Paul (My Life With Bob: Flawed Heroine Keeps Book of Books, Plot Ensues, 2017, etc.) and Russo, the children’s book editor for that publication, provide standard-issue but deftly noninvasive strategies for making books and reading integral elements in children’s lives. Some of it is easier said than done, but all is intended to promote “the natural, timeless, time-stopping joys of reading” for pleasure. Mediumwise, print reigns supreme, with mild approval for audio and video books but discouraging words about reading apps and the hazards of children becoming “slaves to the screen.” In a series of chapters keyed to stages of childhood, infancy to the teen years, the authors supplement their advice with short lists of developmentally appropriate titles—by their lights, anyway: Ellen Raskin’s Westing Game on a list for teens?—all kitted out with enticing annotations. The authors enlarge their offerings with thematic lists, from “Books That Made Us Laugh” to “Historical Fiction.” In each set, the authors go for a mix of recent and perennially popular favorites, leaving off mention of publication dates so that hoary classics like Janice May Udry’s A Tree Is Nice seem as fresh as David Wiesner’s Flotsam and Carson Ellis’ Du Iz Tak? and sidestepping controversial titles and themes in the sections for younger and middle-grade readers—with a few exceptions, such as a cautionary note that some grown-ups see “relentless overparenting” in Margaret Wise Brown’s Runaway Bunny. Laura Ingalls Wilder’s Little House series doesn’t make the cut except for a passing reference to its “troubling treatment of Indians.” The teen lists tend to be edgier, salted with the provocative likes of Art Spiegelman’s Maus and Angie Thomas’ The Hate U Give, and a nod to current demands for more LGBTQ and other #ownvoices books casts at least a glance beyond the mainstream. Yaccarino leads a quartet of illustrators who supplement the occasional book cover thumbnails with vignettes and larger views of children happily absorbed in reading.

Mostly conservative in its stance and choices but common-sensical and current.