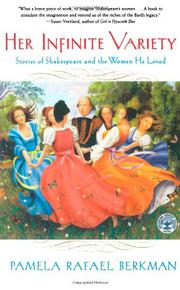 Stories of Shakespeare and the Women He Loved

Berkman debuts with ten pleasant albeit airy historicals about episodes in Shakespeare’s life or characters in his plays.

At age 11, in “Gold,” Shakespeare declares to his mother that he won’t follow in his father’s footsteps as a glover, but instead—somehow—will earn great riches. And “In the Bed,” presumably Anne Hathaway’s second-best, his plan is formed; there is happy lovemaking between husband and wife before Shakespeare’s departure for London (“I believe I can be effective, writing for the theater,” he says in one of the moments of particular heavy-handedness that are sprinkled throughout), though in the same bed there’s also grief when son Hamnet dies of fever. In his mean lodgings in London, Shakespeare works on A Midsummer Night’s Dream as the fairy-queen Titania hovers over his shoulder commenting—and objecting that she’s made to love an ass. Though monologues by Ophelia (“Dark Blue”), Lady Macbeth (“The Scottish Wife”), and Juliet’s love-denied mother (“Duty”) have their own sorts of interest, they satisfy less than do the sketches offering fictional peeks into the life of Shakespeare himself. These are more abundantly provided in “Jennet,” where the author sires an illegitimate son, and in “Mary Mountjoy’s Dowry,” about life in the working-class London house where the great man boards—a piece that includes extensive diary-entries from the period. “No Cause” is among the most ambitious here, having to do with the marriages of Shakespeare’s daughters, especially plain Judith, who at 30 feels compelled to settle for an especially humiliating offer, her only one. Best of all and most deft with its learning may be the last, when Shakespeare dies in the large kitchen at New Place (the kitchen is where it’s warmest), thinking of Elizabeth I, in “Diamonds at Her Fingertips.”

Amiable manifestations of the bard’s life and times, though without the sheer driving éclat of, say, last year’s Mrs. Shakespeare, The Complete Works, by Robert Nye.