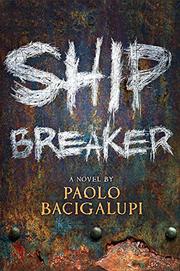 A gritty teen betrays his father and flees his grim existence in a post–global-warming Gulf Coast village to protect a young woman he barely knows in this gripping futuristic thriller. Fifteen-year-old Nailer works on the “light crew” as a ship breaker, salvaging metals from abandoned oil tankers. Nailer’s vicious father routinely beats him. In this violent world where people do anything for money, Nailer’s future seems bleak until he discovers Nina, the wealthy, attractive survivor of a shipwreck. Rather than kill Nina and steal the salvage, Nailer opts to save her, triggering a harrowing journey to the submerged cities of Orleans to find people loyal to Nina. As Nailer experiences brutal betrayals, he relies on his wits and learns the people worth calling family are the ones who “[cover] your back.... Everything else [is] just so much smoke and lies.” In Bacigalupi’s defiled, depressing landscape populated by mercenary humans and mechanical dog-men, Nailer’s loyalty offers hope. Told in the third person, this stark, surreal story sends an alarm to heed the warning signs of climate change or suffer a similar fate. (Science fiction. 12 & up)