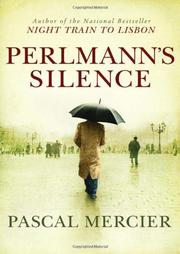 A slow-moving portrait of grief and dislocation by the author of the fast-moving Night Train to Lisbon (2007).

The Perlmann of the present novel—Swiss author Mercier’s first book, published in German in 1995—is a German linguist, the master of several languages, who has recently lost his wife and, with her, his interest in much of anything that has to do with his former life. Once he had been passionately committed to the world of language and the mind, even disengaging from his parents over their insistence on speaking their native Plattdeutsch (“they were increasingly led simply by the phrases and metaphors of the dialect, and by the prejudices that were crystallized in it”). Now Perlmann hangs around his apartment, avoiding the work he is supposed to be doing. All that changes when, at one of the conferences Perlmann still constantly attends, an Italian linguist, now employed by industry, recruits him to become part of a think tank of scholars devoted to questions of how language affects mind and vice versa. Perlmann finds himself out of his element in the political jockeying of the para-academic group, where battles of one-upmanship are played out with cigarette packs (this is Europe, after all, and everyone smokes); moreover, he’s frozen when he finds himself called on to deliver a keynote address, finally turning in desperation to the work of an unsung scholar that he thinks he can pass off as his own. Plagiarism thus hatched, Perlmann breathes a little easier—until, that is, he learns that the source of his stealing has scraped up the rubles necessary to travel to the conference. Writes Mercier, “There was only one thing he hadn’t thought about: that Leskov was a flesh-and-blood human being with his own will and pride.” The setup is worthy of a David Lodge or Malcolm Bradbury, but Mercier lacks the humor of either of those English satirists; instead, the novel settles into a kind of slow funk, the literary equivalent of moping, as Perlmann wrestles with what to do next, surprised by his own torpor and reluctance. But for readers of a philosophical bent, appreciative of slowly unfolding, elegant tales, this will be a pleasure.