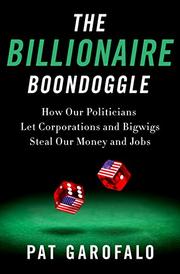 Garofalo, the former assistant managing editor for opinion at U.S. News and World Report, presents an astute argument against the courting of big entertainment by politicians and city leaders.

The author asserts that this greed-driven entanglement is a mutually beneficial financial arrangement only profitable for those doing the handshaking, leaving community programs and employment forecasters with the empty promises of sizable funding that often fails to materialize. Armed with palpable outrage, Garofalo systematically supports his allegations with pages of fact-based, real-world examples. He begins with the Hollywood movie machine, which swoops into urban areas with the promise of an “economic renaissance” and reaps the benefits of tax breaks, funding that could be earmarked for government programs or underfunded schools. The author describes internet retail giant Amazon’s epic search for a second North American headquarters location, which ignited a fiery bidding war in several major cities. Yet the company’s proposal required aggressive corporate tax incentives to “offset initial capital outlay and ongoing operational costs.” The location offering the sweetest deal wins, Garofalo acknowledges, but at the expense of funding local social services and infrastructural improvements that truly require the kind of financial support spent on corporate tax breaks. In a few of the author’s most inspired and fiery rants, he skewers sports stadium “swindles” and hosting bids for the World Cup or the Olympics, which he colorfully describes as “an orgy of waste, spending, and unfulfilled promises.” Refreshingly, he also discusses a concerted group of grassroots Bostonian activists who managed to deflect the entire bid away from their city. Though not entertainment-based, big-box stores and the public subsidies they receive also attract Garofalo’s scrutiny. A robust closing chapter on the history and the dizzying facets of the corporate tax provides an appropriate coda to an intensive analysis. Though he advocates for swift policy changes and corporate tax reform, the base-level solution, he writes, is resisting shoulder-shrugging complacency and voting in local representatives who will resist this type of inequitable exchange.