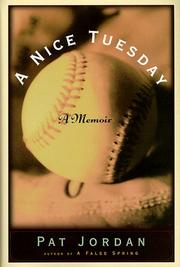 Baseball serves as a secondary backdrop for this entertaining autobiographical account of a middle-aged man’s pursuit of unfulfilled dreams. In the late 1950s, Jordan was a highly touted up-and-coming pitching phenom, but he managed only a few years of unsuccessful minor-league play. After leaving the sport in 1962, Jordan eventually became a freelance writer of articles and books (A False Spring, 1975, etc.), but despite his successes, he was still haunted by thoughts of what-could-have-been. Finally, at the age of 56, he returned to pitch one inning in a professional minor-league game for the Waterbury Spirit in Connecticut. While Jordan records vividly the chronology of this event and his physical and mental preparation for the challenge, the book is filled more with revelations of the author’s past and with present-day anecdotes, as he tries to make sense of his life’s time-worn journey. Some familiar sports names appear in the book, but it’s the excellently drawn cast of colorful players in Jordan’s life that dominate, including: Susan, his sensual and supportive wife; his older half-brother, George, a lawyer, whose unconditional love is mixed with wistful envy; and Brian LaBasco, the high school catcher who helps Jordan train and who reminds him of “the me I might have been.” Even Jordan’s pet dogs figure prominently: they teach him to love, genuinely and unabashedly. Jordan is a flawed and not particularly noble hero; in fact, his selfishness, weaknesses, and fears are revealed throughout. But this frankness is what gives overall credence to his story and ruminations, helped greatly by his skillful writing, which shifts easily from bawdy bravado to humor to insightful introspection. More a midlife coming-of-age memoir than sports book, a tale of growing older, of second chances, and of making peace with oneself.