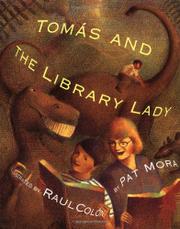 TOMAS AND THE LIBRARY LADY

A charming, true story about the encounter between the boy who would become chancellor at the University of California at Riverside and a librarian in Iowa. Tom†s Rivera, child of migrant laborers, picks crops in Iowa in the summer and Texas in the winter, traveling from place to place in a worn old car. When he is not helping in the fields, Tom†s likes to hear Papa Grande's stories, which he knows by heart. Papa Grande sends him to the library downtown for new stories, but Tom†s finds the building intimidating. The librarian welcomes him, inviting him in for a cool drink of water and a book. Tom†s reads until the library closes, and leaves with books checked out on the librarian's own card. For the rest of the summer, he shares books and stories with his family, and teaches the librarian some Spanish. At the end of the season, there are big hugs and a gift exchange: sweet bread from Tom†s's mother and a shiny new book from the librarianto keep. Col¢n's dreamy illustrations capture the brief friendship and its life-altering effects in soft earth tones, using round sculptured shapes that often depict the boy right in the middle of whatever story realm he's entered. (Picture book. 7-10)