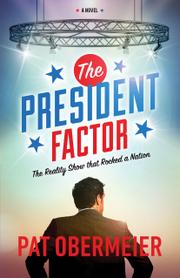 The Reality Show That Rocked A Nation

Handsome, charismatic, and single, Sen. Adhemar Reyes (D-NY) is unaware how much his life will change when he suggests that presidential candidates should have to participate in a reality show to prove how they’ll perform in office. Months later, he finds himself cast with Sen. Zeniba “ZeeBee” St. George (D-MA) against Gov. Beau Simpson (R-TX) and Rep. Mike Charleston (R-FL). Equal parts sly and stupid, Beau has partnered with a comically dumb running mate. The contestants’ first problem: how to deal with a proposed Russian invasion of Finland. While the Republican candidates jet off to Finland in order to beat Adhemar and ZeeBee to Helsinki’s Olympic Stadium, the Democrats travel to Chad to meet with actual combat troops. In Finland, Beau and Mike enjoy native delicacies while Beau blusters and claims to have a “plan.” Later, an absurd right-wing commentator suggests that the Hispanic Adhemar is actually of African descent. What Beau lacks in intelligence, he tries to make up in cunning, although in the end, he gets caught in his own trap. He enlists the help of the incumbent Republican president, who, in turn, attempts to coerce ZeeBee’s CIA agent spouse, Sam, into providing insider information. However, Beau is too stupid to realize he is being conned. Obermeier’s story has an obvious political bias that will be hilarious to some readers and infuriating to others. Its cadre of secondary characters isn’t as nuanced as the delicious Adhemar and ZeeBee, but the most intriguing player is the underused Marisol, Adhemar’s mother. The eponymous television show, The President Factor, effectively illustrates the inevitable spin that commentators, editors, and producers can put on even the most innocent statements. Adhemar’s epiphany—that some people can’t differentiate between fantasy and reality—defines the novel’s more serious purpose.

A timely caricature of the worst and the best of American politics.