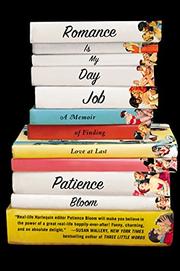 ROMANCE IS MY DAY JOB

A Memoir of Finding Love at Last

A veteran editor of romance novels at Harlequin delivers a witty memoir of her history with romance.

Unlike the novels she edits, her real-life relationships have been messy and the happy endings elusive. Bloom’s story begins at a private high school in Connecticut, when she invited “Harlequin-hero gorgeous” Kent to a formal dance only to be ditched, then rescued by the popular, “fiendishly cute” Sam, who swirls her around the dance floor and insisted they have their picture taken. The photo becomes an important factor later in the story. From high school to college to teaching to a successful editing career, readers follow the author’s quest for Mr. Right. She cleverly juxtaposes the conventions of romantic novels and movies with the challenges of maintaining a real relationship, avoiding maudlin territory. She chronicles her series of at-first-exciting but ultimately deficient boyfriends, and her encounters inspire a humorous contrast of romantic archetypes—“The Secretive Hero (Who May Be Hiding Something Really Bad),” “Dangerous and Sexy Alpha Male Heroes That Are Supposed to Have a Heart of Gold,” “The Beta Hero (Who Cooks and Isn’t a Tool)”—to their real-life counterparts. This is classic girls'-night-out dishing. Though the men in her memoir, with the exception of one, are more typecast than fully formed, the deeper thread here is the idea of self-evaluation and betterment. “This is the part of any romance novel that is never included, the mundane details, the forging ahead, the suffering that doesn’t involve pining for a boy,” she writes. Despite insecurities, Bloom, a survivor of a violent crime, reveals an inner strength and resolve to carry on.

In the end, it’s not romance but something more elusive that Bloom finds: intimacy. Romance may wane as the quotidian details of cohabitation intrude on hearts and flowers, but that’s when true love begins.