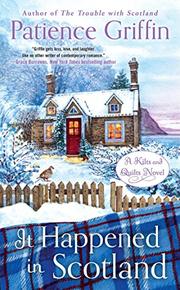 IT HAPPENED IN SCOTLAND

In a quaint Scottish village by the sea, a young American widow gets a second chance at love.

Rachel Granger hasn’t been back to the village of Gandiegow since she buried her husband three years ago. Now she's returning with her 5-year-old daughter, Hannah, at the request of Hannah’s grandfather Abraham Clacher. Rachel wants to get in and out of Gandiegow as quickly as possible, especially when she sees that her late husband Joe’s cousin Brodie has returned home to take over Abraham’s fishing business. She broke Brodie’s heart six years earlier, when, hours before her wedding, she confessed her love to him and made him think she would call things off with Joe and marry him instead. As expected, their reunion is rocky, with Brodie full of bitter mistrust and Rachel unsure of how to tell him what a mistake her marriage to Joe was. In the meantime, Rachel’s skills as a quilter are called upon at the Kilts and Quilts retreat being held nearby, and Hannah is enjoying practicing her Scottish brogue and winning her grandfather’s heart. The more time Rachel spends in Gandiegow, the harder it is to leave, and even Brodie’s steely determination to resist Rachel begins to wither. This is the sixth installment in Griffin’s Kilts and Quilts series (The Trouble with Scotland, 2016, etc.), capturing the cozy charm of a snow-covered village overlooking the North Sea. Much of the action takes place over Christmas, which would have made this a perfect book to curl up with over the holidays except for its January release date. Griffin relies heavily on dialogue to tell the story, which can become tiresome. Many villagers enter the storyline, sometimes making it stray too far from the evocative setting and the two main characters.

A fun hop to scenic Scotland for the price of a paperback.