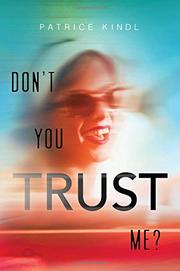 DON'T YOU TRUST ME?

Fifteen-year-old “white-bread-white” Morgan is one of the “cold people”: she lacks a conscience; love and fear don’t apply to her; she’s indestructible; and she never does anything for anyone unless there’s something in it for her.

When Morgan’s parents send her to the New Beginnings School for “troubled teens,” she finds a way to work the situation to her advantage. At the airport, she convinces another girl, Janelle, to switch places with her. It’s a good deal: Janelle can run away with her boyfriend, while Morgan can take Janelle’s place with relatives the latter hasn’t seen since childhood. Morgan fits right into her affluent new “family,” and, as Janelle, she easily convinces them she’s changed her name to Morgan. Morgan creates a new life in which she manipulates the entire, mostly white community into thinking she’s a selfless, upstanding citizen. When others cotton on to her deceit, she deflects their suspicions with more lies, but her grandiosity threatens to be her downfall. Readers may find themselves questioning the over-the-top naiveté of the secondary characters, especially that of Morgan’s psychiatric social worker “aunt,” but it serves to punctuate how convincing Morgan is. The first-person narration combined with Morgan’s compulsive lying will have readers wondering whether or not she’s at all reliable, a device that effectively compounds the tension.