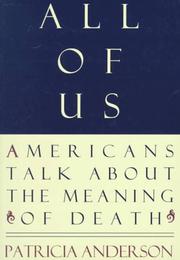 Americans Talk About the Meaning of Death

What do you feel about death? Anderson, a former radio talk- show host and TV/radio producer, presents an anthology of 63 brief, personal answers. Denial of death, says Anderson, accounts for much that is flawed in the American approach to life, yet many of us do in fact think about death and are glad for a chance to talk about it. We hear the producer of Murphy Brown discussing the attitudes backstage to an episode dealing with death and the reaction (mainly positive) of the public. A retired CIA officer looks back ruefully on some of his actions in Vietnam and compares the two sides' respective views of dying. Nine inner-city teenagers tell how seeing violence every day makes them think about their own deaths. One of the finest contributions for depth of insight and sensitivity is Rabbi Sharon Kleinbaum's portrayal of the role of Jewish ritual in helping people deal with death, especially the custom of mourners filling in the grave and sitting shiva with the bereaved. But in view of the title Anderson has chosen for this book, the selection of writers is disappointingly homogeneous. A large number belong to the professions or to her own world of the media and the arts, while the ideologies they express are mainly New Age or agnostic. She intersperses their contributions with nine ``chronologies,'' which are supposed to help us understand our present outlook on death by reviewing its history in Western culture: In fact, these insertions abound in mistakes, e.g., that the early Christians had a cult of suicide. Anderson's snide generalizations about European religion show that she has a number of axes to grind in this area. A good idea gone wrong because of Anderson's religious, social, and philosophical blinders.