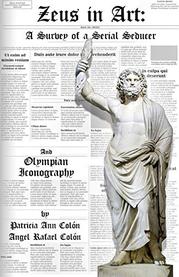 A Survey of a Serial Seducer

An illustrated survey focuses on the artistic sources documenting the legendary lecherousness of Zeus.

Zeus figures prominently in Greek mythology as the “god of the sky, of lightning and thunder and king of the gods on Mount Olympus.” He’s the subject of innumerable depictions in visual art and poetry, both ancient and modern. Patricia Ann Colón and Angel Rafael Colón concentrate on two particular aspects of Zeus’ legend, his lurid reputation as a “seducer, rake, roué, and rapist” and his general, immoral “vindictiveness.” The book points out that “mythological tales usually cast Zeus as a lustful, narcissistic, temperamental and vengeful god who launched puissant thunderbolts with wild abandon to those who offended him, apparently an unsettling common occurrence, and is known as a consummate reprobate who maintained and further fostered the family tradition of incestuous relationships, whether sanctioned by marriage, seduction or rape.” The authors astutely draw on a rich literary tradition that features Zeus, including ancient writers such as Homer and Hesiod and modern ones like William Butler Yeats. Nevertheless, the highlights of the volume are its discussions of Zeus’ pictorial representations as well as those of his family and victims, often overlapping groups. Zeus was an equal opportunity predator, victimizing other gods, including his own kin; nymphs; and “vulnerable mortals.” The authors include nearly 100 beautiful illustrations of paintings and sculptures, a diverse offering of work by the likes of Rubens, Titian, and Rembrandt. And while the subject matter can be grim—Zeus is linked to dozens, if not hundreds, of rapes—the authors attempt to inject a spirit of levity into the book, sometimes exploring the gossipy salaciousness of Zeus’ transgressions. Toward the end of the volume, they include a newspaper article from the ersatz tabloid the Olympian Times with the headline “Zeus Again Accused of Rape.”

A historically perceptive and cheeky tour of a licentious mythological figure.