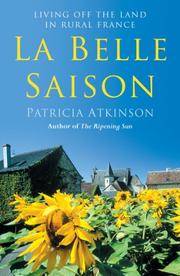 Living Off the Land in Rural France

A midlife memoir that doesn’t measure up to other recent women-living-a-European-fantasy books, lacking both Frances Mayes’s passion and Marlena de Blasi’s love of language—not to mention a story.

Atkinson (The Ripening Sun, not reviewed) acquired a life many can only dream about when she and her husband (both Brits) bought a vineyard in France. The marriage fizzled, and hubby moved back to England, but she stayed on, making a go of the grapes. In this peek at her new life, she delivers charming (if also tedious) scenes of rustic living, musings that never delve deep into her own psyche. Atkinson includes interesting discussions of the wine-making process, mouthwatering descriptions of Gallic cuisine and portraits of her eccentric friends and neighbors. Interleaved throughout is the account of her relationship with Fidde, an amiable man from Switzerland she met through friends. Taken with Atkinson, Fidde treated her to dinner, then found every available excuse for coming to France. Eventually, he bought some property and settled down near his new friend. Though the author devotes considerable space to her various dates with Fidde, she never manages to convey the texture of their relationship, which was cut short when he died shortly after his move to France. Atkinson fails to demonstrate the power of this personal loss, which feels a tad anticlimactic and may leave readers wondering why they slogged through so many long asides about the man.

“Fidde told me that real freedom comes when you know yourself”—one of the many clichés trying to pass for insight here.