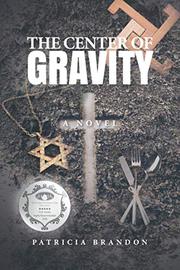 THE CENTER OF GRAVITY

Brandon delivers two young protagonists—and their tumultuous vectors—Sonne Becker and Rainer von Bauchelle. The Beckers live in Berlin and hate the Nazi movement. The von Bauchelles live in Colmar, Alsace. They, too, are good people, and the teenage Rainer’s best friend is a Jew, Josef Taffel. Then Germany goes to war; Sonne’s father is conscripted; and the Nazis move into Colmar. After Rainer graduates from the University of Strasbourg with a degree in art history and restoration, he is a rising academic star who gets conscripted by the Nazis for his expertise. Meanwhile, Sonne is sent to the Wolf’s Lair, Hitler’s fortress, first as a food taster (Der Führer fears being poisoned). Later, because she is a beautiful specimen of Aryan womanhood, she is subjected to a forced artificial insemination. With the help of a sympathetic guard, she escapes, winding up at a museum in Konigsberg, where she and Rainer meet and soon plan to flee to America. Brandon’s tale is very bumpy. The prose can be overdone and too writerly, with a surplus of adjectives (“The man, a few inches taller than the others, was handsome in a classic rebellious kind of way, with thick brown hair tousled in rugged abandon about an intense face and the deepest of green eyes. He…saved his slow, lazy smile for Rennie”). But there are some effective scenes. An evening in 1938 with the Beckers and the fatuous, Nazi-loving Hirsch family, for example, is especially well handled. The Hirsches are appropriately arrogant and odious. Readers will also be cheered by the benevolent and heroic people that the protagonists meet along the way. One real historical nugget is the presence of Albert Göring—yes, Hermann’s brother—who in real life rescued as many people as he could and in these pages crosses paths with Sonne and Rainer. But Brandon should have stopped when she was ahead and ended the tale early, with a short and graceful denouement. Instead, the author offers a final reveal that will leave readers rolling their eyes. Even fiction has its limits—or should.

An intriguing but uneven war tale.