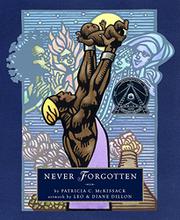 A searing cycle of poems describes a father's grief after his son is taken from their home in Mali and enslaved in America.

McKissack's tale of a father's grief, old ways carried to the new world and a circle broken and reforged to span the ocean itself echoes ancient storytelling traditions. An initial poem, "The Griot's Prelude," describes "men with the blue of the sky in their eyes" coming deep into the forests to take slaves. A Mende blacksmith in 18th-century, Mali raises his child himself when the infant's mother dies in childbirth. Dinga enlists the Mother Elements of Earth, Fire, Water and Wind as the elders who help to raise Musafa. Sounds of drums and song for each element (Fire is "Kiki Karum Kiki Karum Kiki Karum," while Water is "Shum Da Da We Da Shum Da Da We Da," for instance) emphasize the storyteller's voice in the narrative, inviting listeners to participate and engage. Full-page and border paintings in acrylic and watercolor use strong black lines, almost like woodcut engravings, in deep browns, earth colors and subtle jewel tones against creamy backgrounds. The boy learns to make beautiful objects of metal but is taken by slave traders, and it is years before Dinga learns from the Wind that his son, now Moses, has become a gifted apprentice blacksmith in Charleston, S.C., soon to be freed by the smithy owner.

A totally absorbing poetic celebration of loss and redemption.