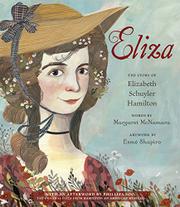 An imagined letter tells the story of Eliza Hamilton so that her unborn great-granddaughter will know about her life, accomplishments, and beliefs as a patriot, socialite, philanthropist, child advocate, de facto archivist, dedicated wife, and loving matriarch. Paintings reminiscent of 18th-century American art show Eliza’s journey from her privileged childhood with slaveholding parents in upstate New York to her rebellious marriage to Founding Father Alexander Hamilton and their life together and on to her work founding and fundraising for New York’s first orphanage and her impressions of the many presidents she knew. The realities of slavery are addressed briefly, and Eliza’s role in introducing Hamilton to benefactors and politicians is mentioned. While some of the history presented seems unnecessarily fragmentary given that this is not an original letter—no background for the Hamilton/Burr duel is presented within the text, for example—the endnotes are particularly detailed, and overall, the focus stays on Eliza rather than her famous spouse, presenting a determined, resilient, and individualistic white woman of her time, witness to many years of early American history. An afterword by Phillipa Soo, who played Eliza in Hamilton: An American Musical, is appended.

Well-researched and intricately illustrated, this portrait provides an accessible jumping-off point for those interested in the Broadway musical and captures an extensive historical period from a specific and interesting perspective. (Picture book/biography. 6-10)

VOTE FOR OUR FUTURE!
by Margaret McNamara
Children

POOP OR GET OFF THE POTTY!
by Margaret McNamara
Children

A POEM IN YOUR POCKET
by Margaret McNamara
Children

GOLDEN AT THE FANCY-DRESS PARTY
by Margaret McNamara

ALMA AND THE BEAST
by Esmé Shapiro
Children

LEAVE IT TO ABIGAIL!
by Barb Rosenstock
Children

BEFORE SHE WAS HARRIET
by Lesa Cline-Ransome
Newsletter sign-up