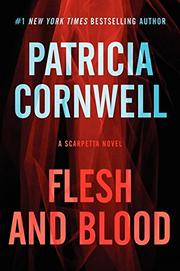 Happy birthday, Dr. Kay Scarpetta. But no Florida vacation for you and your husband, FBI profiler Benton Wesley—not because President Barack Obama is visiting Cambridge, but because a deranged sniper has come to town.

Shortly after everyone’s favorite forensic pathologist (Dust, 2013, etc.) receives a sinister email from a correspondent dubbed Copperhead, she goes outside to find seven pennies—all polished, all turned heads-up, all dated 1981—on her garden wall. Clearly there’s trouble afoot, though she’s not sure what form it will take until five minutes later, when a call from her old friend and former employee Pete Marino, now a detective with the Cambridge Police, summons her to the scene of a shooting. Jamal Nari was a high school music teacher who became a minor celebrity when his name was mistakenly placed on a terrorist watch list; he claimed government persecution, and he ended up having a beer with the president. Now he’s in the news for quite a different reason. Bizarrely, the first tweets announcing his death seem to have preceded it by 45 minutes. And Leo Gantz, a student at Nari’s school, has confessed to his murder, even though he couldn’t possibly have done it. But these complications are only the prelude to a banquet of homicide past and present, as Scarpetta and Marino realize when they link Nari’s murder to a series of killings in New Jersey. For a while, the peripheral presence of the president makes you wonder if this will be the case that finally takes the primary focus off the investigator’s private life. But most of the characters are members of Scarpetta’s entourage, the main conflicts involve infighting among the regulars, and the killer turns out to be a familiar nemesis Scarpetta thought she’d left for dead several installments back. As if.

No wonder Scarpetta asks, “When did my workplace become such a soap opera?” Answer: at least 10 years ago.