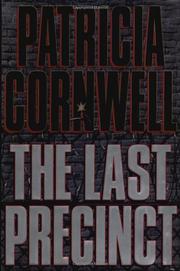 What could be more open and shut than a case in which a widely sought killer tricks his way into the home of Virginia’s Chief Medical Examiner, attacks her with a hammer of exactly the same sort he’d used in killing Richmond Deputy Police Chief Diane Bray, and is still on the scene when police arrive? But when Dr. Kay Scarpetta, the intended victim of notorious Jean-Baptiste Chandonne, hears the statement the suspect (dubbed Le Loup-Garou, the Werewolf, for the fine, undisguisable hair covering his entire body) has given the police, she realizes that despite her obvious suffering and terror, attested by the elbow she broke just after throwing some providential formalin into her assailant’s eyes, the case boils down to her word against his. As she and her embattled loyalists—ATF niece Lucy Farinelli; neanderthal Richmond Police Captain Pete Marino; New York sex crimes ADA Jaime Berger—toil to link Chandonne’s current murder spree first to the killing of a Big Apple weathercaster two years ago, then to the execution of Scarpetta’s FBI lover Benton Wesley, the news gets steadily worse until Scarpetta finds herself entering a grand jury chamber not as an expert witness but as a homicide suspect.

The same bureaucratic paranoia, the same grinding intensity, the same trademark down-and-dirty forensics as Black Notice (1999). This time, though, the obsessive revisiting of earlier horrors has a soap-opera sameness, as if Cornwell kept painting her heroine’s ongoing struggles in darker and darker colors because she couldn’t bear to let anything go.