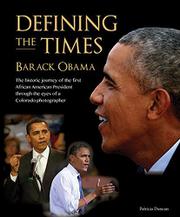 A look back at the presidency of Barack Obama.

Denver, Colorado–based photographer Duncan (A Defining Moment, 2010) got a front-row seat to history when she began documenting then U.S. Sen. Obama’s journey to the White House for local African American newspapers in 2006. She photographed the candidate and his supporters at numerous events in the Rocky Mountain state, including the 2008 Democratic National Convention in Denver. After his election, she continued to document his career nationwide. In this handsome coffee-table book, she couples striking, full-color photos with the full text of many of Obama’s most notable speeches, including his famous 2008 speech on race, his victory-night speech that same year in Chicago, his 2009 and 2013 inaugural addresses, and his 2017 farewell address. Because the book focuses heavily on Obama’s many visits to Colorado, it sometimes neglects other important events. Two Air Force Academy commencement addresses are included, for example, while his remarks on the school shooting in Newtown, Connecticut, in 2010 and on the 50th anniversary of the Selma-to-Montgomery civil rights march are notably absent. Some speeches by other political figures are included as well, such as Hillary Clinton’s acceptance of the 2016 Democratic presidential nomination and U.S. Rep. John Lewis’ speech at the 2008 Democratic convention. Supplementary material includes a list of Obama’s accomplishments; information on the presidential limousine, nicknamed “The Beast,” and Air Force One; and Electoral College maps. But it’s the numerous, revealing photos that are the main draw, including one image of a smiling Obama walking onstage to accept his party’s nomination and another of the jubilant faces of his supporters on election night in 2008. The book even provides an inside look at the White House, as Duncan shares photos that she took during the 2014 Holiday Reception, during which she got a few candid shots of the Obamas’ dogs Bo and Sunny. The author’s sincere admiration for Obama shines through in this collection, which effectively commemorates a historic presidency.

Readers who are nostalgic for the Obama years will appreciate this unique tribute.