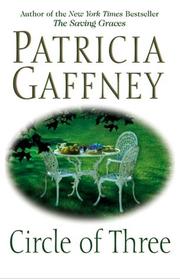 A conventional take on the well-worn theme of the relationship between mothers and daughters, this time exploring the effects on lives when a husband and father dies suddenly and three generations find the past still shaping their lives.

As seems almost obligatory with this increasingly formulaic concept, Gaffney (Saving Graces, 1999) has three women take turns narrating the story: Carrie Van Allen, the recently widowed wife of mathematician Stephen; her 15-year-old daughter Ruth; and Dana Danziger, Carrie’s mother, all of whom live in Clayborne, the small Virginia town where Carrie’s father and Stephen both taught at the local college. Carrie, an artist, feels especially responsible for Stephen’s heart attack—they had been arguing minutes before it occurred—but her guilt has even deeper roots: she realizes she never really loved Stephen and that her heart still belongs to local farmer Jess Deeping, whom she’s adored since high school. Ruth, missing her father, and worried about Carrie’s depression, finds solace in visiting Jess’s farm. Dana, meanwhile, whose family were dirt-poor country folk, is bored with husband George, whom she married because she thought he’d give her social standing; she now wants Carrie to remarry someone of good family and promise—meaning not Jess. Carrie, though, who starts painting again, is newly drawn to Jess and resents all the more her mother’s meddling and her earlier role in preventing her from marrying Jess previously. The two become lovers, angering both Ruth and Dana. Shocked by what she thinks is Carrie’s disloyalty to Stephen, Ruth runs away to Washington, D.C., in an action that seems more plot device to bring things to a head than nail-biting scare: for, once back home, all three women confess their misgivings and mistakes and are ready to move on.

A disappointing second outing marked by a thin story and thinner characters.