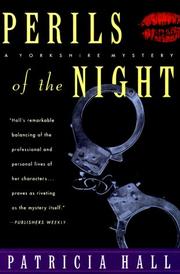 PERILS OF THE NIGHT

Bradfield’s Chief Inspector Michael Thackeray (The Dead of Winter, 1997, etc.), fettered by his own past tragedy, is not yet fully committed to his reporter girlfriend Laura Ackroyd. At the moment, he has his hands full with the bloody killing of young college student Louise Brownlow and with the disappearance of her roommate Jane Watson, both residents of Roz Jenkins’s boardinghouse. Louise’s death may have a connection to the suicide attempt of local Vicar Miles Bateman, seen entering her house the night of her demise. Meantime, Laura’s story for the Bradfield Gazette focuses on the town’s notorious prostitution trade, in which impoverished students sometimes compete with the pros and infuriate their handlers. Her story also deals with the damage often inflicted on children by their high-placed, reportedly abusive fathers—like, for instance, Jane’s father, Lord Boulter, who vehemently denies all such allegations in his own case. The answers this time, though, are found unexpectedly elsewhere, almost costing the life of Kevin Brower, Thackeray’s second in command. Potent, suspenseful, and a delicate sounding board for the psychological quandaries abounding here. Another winner for author Hall.